One of the big challenges of our modern societies is the capacity of states to ensure their constituents’ safety against new threats. While security and surveillance is at the forefront for organizations and nations worldwide, there has been a dramatic increase in the demand for aerial data gathering tools, such as drones. Threats are evolving quickly, which means that the tools used to keep us safe need to change too, in order to help better protect citizens and infrastructures.

Drones, or Unmanned Aerial Vehicles (UAVs), widely used by armies for decades, are now being widely used in many fields of public safety and national security: Firefighting, border control, polices operations, first responders, security, for that matter. Though they are more and more used in these fields as easy-to-deploy data gathering tools, emergency response and homeland security organizations now realize that standard battery-powered drones have important operational limitations, reducing the availability of live aerial data during critical operations.

The benefits of tethered drone systems

Standard micro-drones often struggle to meet the on-field expectations: limited flight durations (between 20 and 40 minutes of flight), operational constraints (complex battery management, legal constraints and need for a trained pilot) and safety (fly aways, loss of communication links, battery failures). One of the main sources of drone-related accidents is the loss of signal during a flight. In that case, the drone doesn’t answer his commands and can become a potential danger. If used next to a crowded area or over a sensitive site, this can become a serious threat to public safety. Drones aren’t used at their full potential in the public safety and national security markets, mostly because of these current limitations.

But one type of drones is actually answering these issues, by using a physical link (umbilical) between the drone and the ground: a “tethered drone” (or tether powered drone) is directly linked to its ground station by a tether, providing a virtually unlimited autonomy, secured commands and high-speed data transfer, thus answering most of the problems free-flying drones can have.

For these reasons, tethered drone solutions are much safer solutions than their free-flying counterparts, with a far better cost efficiency than other persistent aerial solutions. By offering persistent aerial coverage and telecommunications capabilities to public safety and national security organizations, they can be deployed easily for various scenarios. 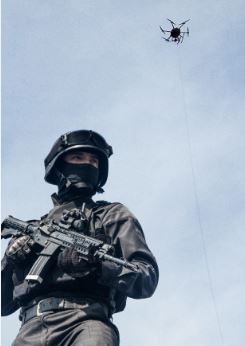 At large crowded events, it is hard for the police to keep a global eye on the situation. In these cases, crucial information needs to be gathered to monitor mob movements, violent protestors, terrorist threats, post-blast situations, etc. To enforce law and order, police forces can highly benefit from a semi-permanent aerial observation point, bringing them advanced situational awareness.

As Assistant Chief Michael Reitan of the West Fargo (North Dakota, USA) Police Department said in a recent interview [1]: “With a drone, we could actually look down and see who and what was there. It would enhance our ability to put resources in the right spot at the right time”.

When getting a continuous aerial video stream is crucial, standard battery-powered drone won’t do the job. But a tethered drone loaded with a high-resolution camera (optical / thermal) can provide this much needed persistent aerial point of view, allowing police forces to identify potential threats, at a far lower cost than a helicopter – in France the average cost for police forces of an hour of helicopter flight is 1400 € [2]. Their quick deployment ensures also a great reactivity during operation time, where alternative solutions (for example aerostats) aren’t as effective.

Every year, a large amount of forests is burned to the ground due to man-made or natural wildfires. In 2015, in the United States only, 10 millions of acre of forests were destroyed. In the fight against the propagation of these large fires, the data gathered thanks to aerial supports has a great importance: it provides critical live information on the situation, helping command units to better coordinate the efforts on the ground and shorten the solving of the crisis.

These fights can last for hours or days, as we have seen it in 2016 in Fort McMurray, Canada, and in the south-west of the United-States. The costs of flying helicopters in these situations are high, and are often incompatible with the budget cuts that many firefighting units suffer from. The logistics of their deployment are also complex and limit their deployments. 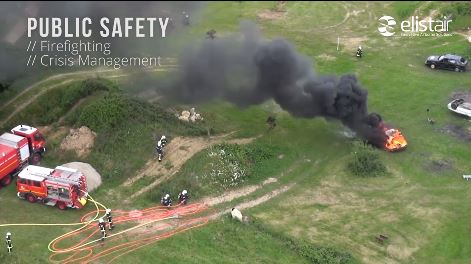 With a tethered drone, firefighters can finally get live aerial data and
signal coverage on-demand, giving them enough range to detect and locate hot points and areas to focus on during the fight. These tethered drone systems are also used in urban environments, providing aerial views where helicopter can’t go, for example between buildings.

As Dany Cotton of the London Fire Brigade said recently, regarding the use of drones for firefighting [3]: “Being able to fly a drone means you could get a much better aerial view. Also if you’ve got a building that’s boarded up, and you think there might be people in there, drones with a thermal imaging camera can run up and down outside the building”.

Another challenge of firefighting operations in remote places is the regular lack of communication means, which reduces the situational awareness, the effectiveness of the intervention, and increases human risks for on-field workforces. The use of a tethered drone for temporary telecommunications – the aerial platform carries a radio transmitter – offers stable communication conditions on the field, even in low coverage areas.

Protecting a country’s borders is vital to its national security. But the difficulty of detecting threats and potential security breaches in complex configurations, at long distances, in remote places, or in total darkness and unpredictable weather conditions – fog, snow, harsh sunlight – is a real challenge for border security professionals and governments.

Border patrols are often equipped with state-of-the-art optical and thermal cameras, but the terrain’s configuration and weather conditions make it hard for them to detect anything, therefore giving opportunities to criminals to thrive. It was recently revealed that U.S. Customs and Border Protection have flown hundreds of domestic drone missions on behalf of other agencies. While micro-drones offer a quick way to have an eye in the sky at a low operational cost, they still suffer from their limited time of flight, reducing their coverage. Tethered to a ground station, for instance on a mobile patrol car, their detection potential is maximized, giving border control professionals a persistent wide view of the surroundings. In addition, they can be programmed to follow the vehicle their station is mounted on. With optical and thermal sensors on the payload, these tethered drone systems can fly and detect suspicious activities by day and night, and are great tools for border control professionals to meet the demand they face at critical infrastructure sites such as country borders, airports, and in coastal, port and maritime environment.

The world has recently endured national disasters of great magnitudes, leading to a loss of hundreds of thousands of lives, the complete ruin of critical infrastructures and destruction of millions of buildings. 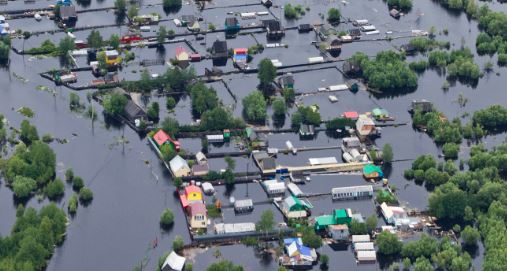 Lost communications and the lack of access to critical information can greatly reduce our ability to recover from these disasters, which number is rising [4], as communications are often partially or partially disrupted due to damaged facilities our power outages.

By solving small UAVs main limitations – limited flight time and safety issues – tethered drones open a wide new scope of use cases for public safety and national security entities, empowering them with “pocket satellites” for aerial observation and surveillance, and better situational awareness on the field.