Overview of the New Technical Solutions for major Events Security

At the end of 2017, the General Secretary of Interpol was concerned about the increase in hooligan, terrorist and cyber security threats to major international sport events, such as the 2016 Euro. Jurgen Stock described a security strategy that “is becoming more international and complex, and requires more than ever cooperation between law enforcement agencies”.

The security strategy must also take into account environmental risks – with, for instance, water quality at the 2016 Olympic Games in Brazil, or the risk of flooding on the Seine at the 2024 Olympic Games in Paris – and reputational risks through social networks, whose influence is only increasing. On the one hand, the risks surrounding major events have therefore got diversified.

On the other hand, the security requirements of insurance companies and the organization teams have considerably increased, with, in addition, political and media pressure. “It is not a question of raising the bar, but rather, by relying on anticipation, consultation and coordination, to assess the degree and level of the threat, and to adapt our response accordingly”, stressed last year the speakers at the “Security Thursdays”, an event organized by S&D Magazine and Milipol (the International Security Expo) on the theme of security at major events.

Security forces – private and state forces – on major events are then increasingly called upon and must be able to intervene in the face of all kinds of threats. So what new tools are available to them?

While organizers are now more reluctant to see drones fly at their events – we remember the drone that accidentally crashed just behind ski champion Hirscher during a slalom in Italy -, the tethered drone is one of the most popular solutions for aerial surveillance in a wider area. 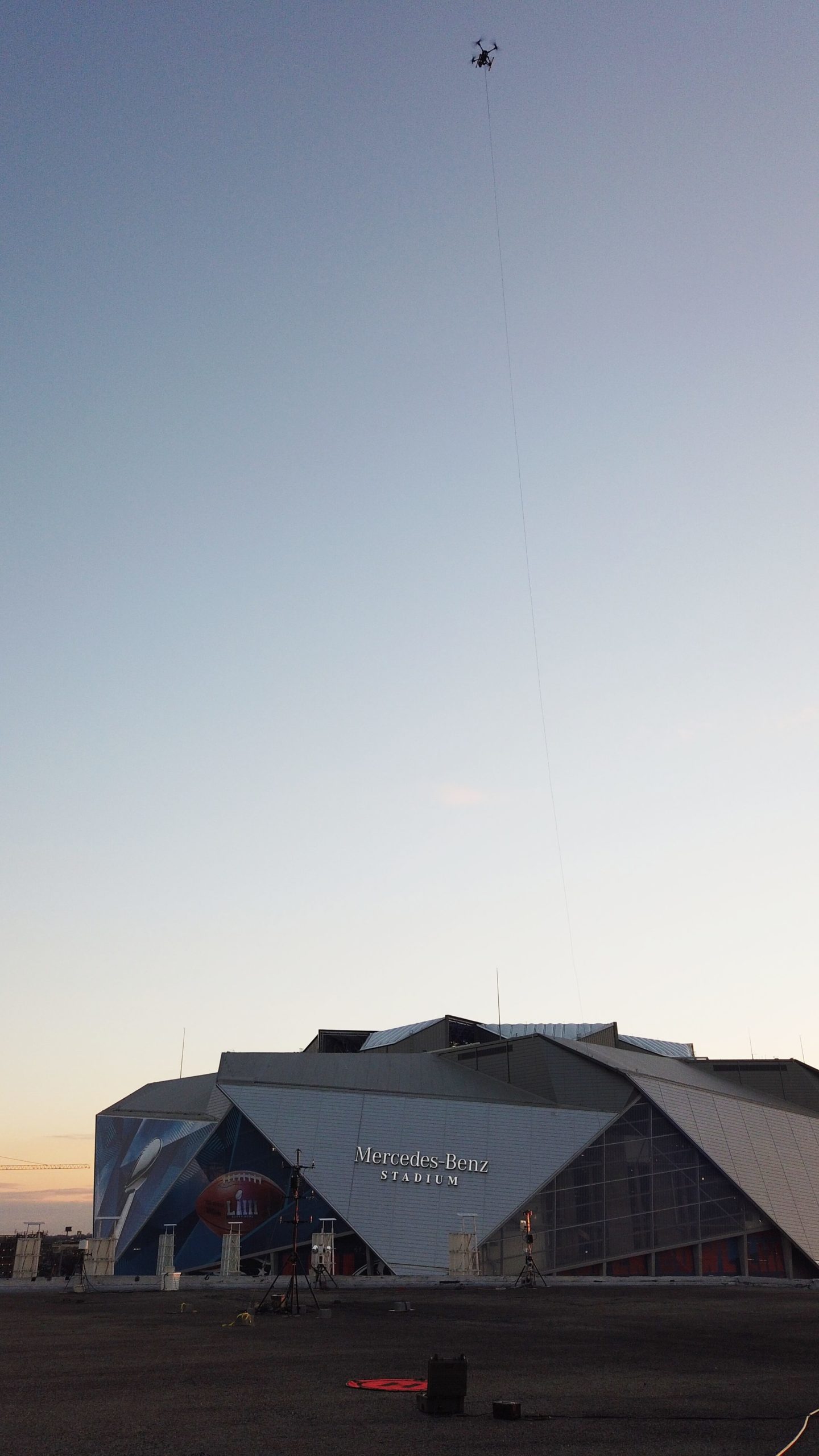 Used during the 2017 Festival of Lights to monitor the entire city of Lyon and even more precisely during the 2018 Ryder Cup or the Peace Forum in Paris, by Delta Drone with the Orion system designed by Elistair, the tethered drone is both a reliable tool and a powerful solution. Indeed, it is reassuring as it flies out of area, at several tens of meters high and is attached to a micro-tether that supplies it permanently with power and prevents any escape. It is also an incredible asset providing an overview and panoramic view of the area up to 200 hectares, with unprecedented accuracy, by being connected in real time and permanently to the command post.

The tethered solution is therefore much more advantageous in terms of costs, time and risk reduction than helicopter coverage or a network of video surveillance cameras that would imply a heavy setting up and dismantling organization. CNN and the NFL have experienced these solutions during the 53rd Super Bowl, using Elistair Ligh-T compact tethering stations to empower DJI M200 drones and provide instant broadcast and aerial surveillance.

Finally, on mobile events – such as demonstrations or pilgrimages – other technical solutions have been successfully tested, such as mini-drones deployed by the Thales group in support of mobile teams on the pilgrimage of Our Lady of Guadalupe, near Mexico City. In a near future, and thanks to its wide range of applications, we can be sure that the tethered drone should also make its entry into this field.

All the information collected on a mission – possibly by a tethered drone – is usually concentrated and processed by one or more “control stations” that monitor the security system in place. While human remain the best analysts, decision support tools are flourishing. These types of solutions “chew” the analysts’ work. This is the case of the Czech group DataFromSky, which will soon make it possible to count, measure (a vehicle speed for example) and analyze before men even start to study it, on live! DataFromSky is a software solution able, through a video recording, to count the number of present vehicles, calculate their individual speeds and accelerations and finally, to classify them and detect anomalies, still in real time. Such solutions allow quicker judgment, more immediate command and easier action in the field.

Communicating commands in real time: what could be simpler than an application?

During major events, the command post therefore receives an incredible amount of information to process and then command many people in charge of security, who must themselves be able to direct a population at any time in a situation of risk. To communicate more effectively, new solutions have emerged and offer real time information to as many people as needed.

This is the case with the Notico Safe application of Deveryware group, which was designed on the fringes of the 2016 Euro in France, to deliver an alert or information – behavioral advice, instructions… – at any time to targeted populations: agents, populations in crisis situations… Thanks to a great mastery of geolocation, “it also allows to relay on social networks the alerts in progress” says Alain Vernadat, Deveryware CEO. The company, member of the Data Intelligence Cluster that competes with the American Palantir solution, has a bright future ahead of it.

Acting in the field: anti-drone solutions.

Admittedly, when we talk about acting on the ground, we still imagine security forces officers at work. But new technological solutions also help to limit human risk… Indeed, with several cases of drone threats in recent years, particularly in Washington, Tokyo and Dresden, it has become urgent to propose anti-UAV solutions that are a good example of this action “on the ground but at a distance”.

Founded in 2010, the American company Department 13, for example, has developed a unique anti-drone technology that uses radio frequency manipulation to support any drone when it flies over a defined exclusion zone. The technology allows the operator to detect, identify and take control of the drone in limited airspace by manipulating the wireless radio protocol running on the ISM band… for a smooth response!

Facing new risks weighing on major events, the priority to guarantee the success of major events is certainly an excellent synergy between the various stakeholders on the ground – organizers, host cities or countries, participants, public authorities and forces, private forces but also spectators. However, such high-tech tools now allow security forces to anticipate and intervene more quickly, while avoiding an escalation of resources to achieve this, as at the 2012 Olympic Games in London, where human resources (41700 men to ensure security, including 13500 military and 12000 police officers) and equipment (combat aircraft and a battery of ground-to-air missiles) had exploded.
The key to a good security system therefore not only lies in the synergy of human forces, but also in the precision of anticipation and intervention, which is made easier by new technological tools.

Find out more about our solutions here