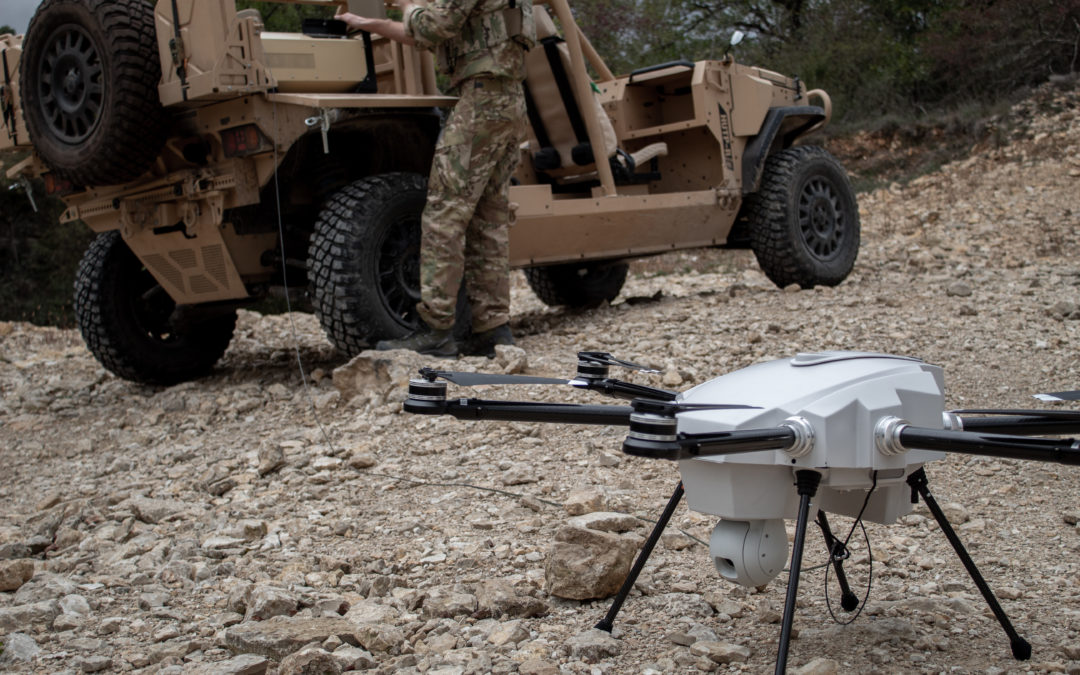 While it might seem hard to believe, drones have been used by militaries around the world for over one hundred years. Early military drones started to appear around 1916 in the form of radio-controlled monoplanes. Since that time, advancements in UAV technology have drastically improved the design and capabilities of drones.

When we think of drones, we typically picture large military aircraft such as Northrop Grumman’s Global Hawk. The news presents stories showcasing the extensive range of these UAVs and the powerful weapon systems they are capable of carrying.

While platforms like the Global Hawk serve an essential purpose, they are not the perfect drone for every military application of UAV technology. Numerous situations require similar capabilities, such as aerial surveillance; however, they are better suited for much smaller platforms.

One of the more recent advancements in the industry has been the introduction of tethered drone systems or tethered drones. Tethered drones’ benefits are ideally suited for military applications such as border security and FOB protection, where day-night surveillance capabilities are crucial to monitoring perimeters and tracking enemy movements.

The tethered drone market is growing significantly because of the many benefits they provide end users. Year-over-year growth in 2019 was estimated at 53.54%. Even more promising, the compound annual growth rate between 2019 and 2023 is over 70%, with just over half (51%) of the growth coming from North American markets.

Many people familiar with drones know very little about tethered drone systems. Without understanding these platforms and the advantages they present to warfighters; military leaders are missing out on UAVs with capabilities perfect for force protection and situational awareness.

Before getting into tethered drone systems, it is best to discuss the types of military drones briefly. There are numerous ways to classify military drones. Countries worldwide rank their UAV platforms by weight, payload capability, range, mission type, and a slew of other criteria.

We will break military drones into four categories for this discussion and briefly describe each type. Our classes include

Micro or nano drones are typically hand-held military drones used at the squad level. These UAVs are almost entirely designed for surveillance only. They give small groups of soldiers the ability to see beyond their current position but are limited in flight duration and optics power.

The FLIR Black Hornet is typical of this drone class. This micro drone weighs less than 33 grams and has a maximum flight time of 25 minutes. Armed with both a 2MP RGB camera and a 160×120 thermal camera the Black Hornet can operate up to 2km away from the operator.

Short-range reconnaissance drones are most often employed by squad to platoon level sized units. These drones are similar in capabilities to micro drones but have somewhat better optics and flight durations. Examples of drones in this category are the Parrot Anafi USA, Vantage Robotics’ Vesper, the Skydio X2-D, Teal Drones’ Golden Eagle, and Altavian’s M440 Ion.

The Parrot Anafi USA typifies the capabilities of drones in this class. With a weight of 500 grams, the Anafi USA has a maximum flight endurance of 32 minutes. Like the Black Hornet it has a dual camera but with much better resolution. The RGB camera can capture 21MP images and has a 32X zoom. The thermal camera has a resolution of 320×256, and the maximum flight range is 4km.

Mid-range reconnaissance drones are much larger than micro drones and short-range reconnaissance drones. The payloads of these drones have significantly better optics and with better range and flight durations. This class of military drones is an asset for company size units. The capabilities of UAVs in this class are ideal for roles like FOB protection and border security.

Drones in this category span a wide range from prosumer platforms on  the low end, such as the DJI Phantom 4 series, to UAVs like AeroVironment’s Raven. This class of drones is where most tethered drones, like Elistair’s Orion are located.

The Raven and the Orion are excellent examples to represent the capabilities of untethered and tethered drones in the class. The Raven has a flight endurance of 60-90 minutes and a maximum transmission range of 10km. The Orion, with tether, is capable of over 10-hour flight times and can detect vehicles at 10km with the addition of unhackable data transmission.

Units employing long-range reconnaissance drones are at the battalion level or higher. The payloads for these platforms offer multiple optics and sometimes include weapon systems. Typically, these assets are ideal for theater-level operations and can travel for thousands of miles without refueling. The Global Hawk and General Atomics’ Predator are in this class of drones.

What Are Tethered Drones and How Do They Work? 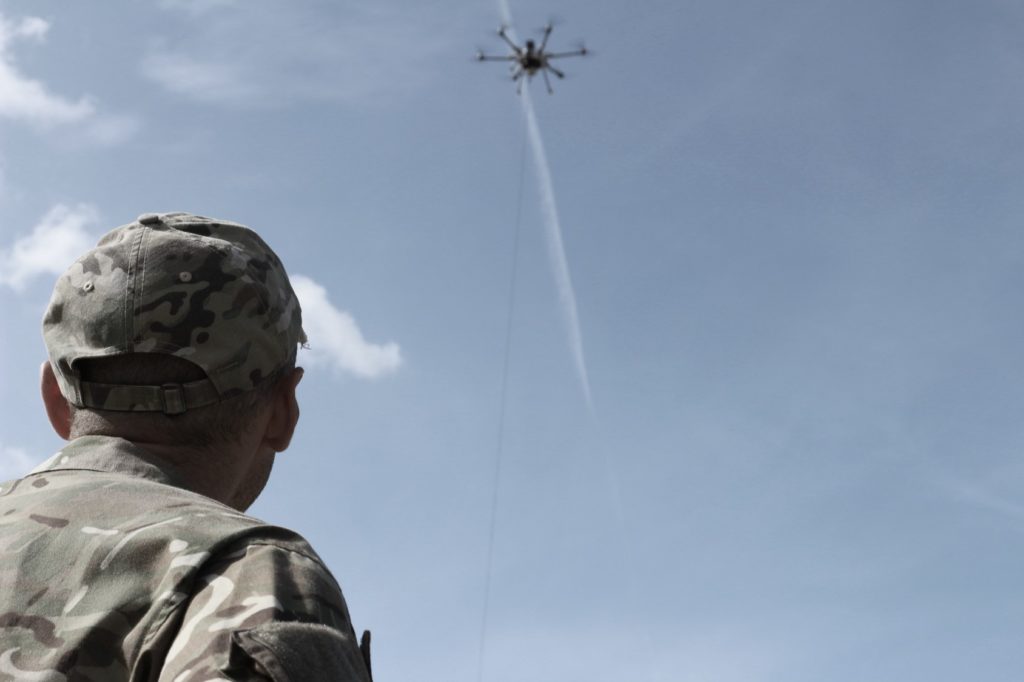 The different types of military drones give one an understanding of how prevalent UAVs are becoming for militaries worldwide. In general, larger drones run on aircraft fuel while the majority of smaller drones utilize LiPo batteries. The dependence on either fuel or batteries is a major limiting factor for platforms of all sizes.

Tethered drones address the limiting factor of power requirements. A tethered drone is essentially a drone connected to a power station on the ground through a tether or cable.

The tether or cable is the connection between the drone and the tethered drone station. Tethers can consist of simple lines meant to hold the drone in place or provide capabilities far beyond merely securing the drone’s position. Industry-leading tethers include fiber optic cables, conductors, BPL lines allowing for dual-comms, and more.

The Benefits of Tethered Drones 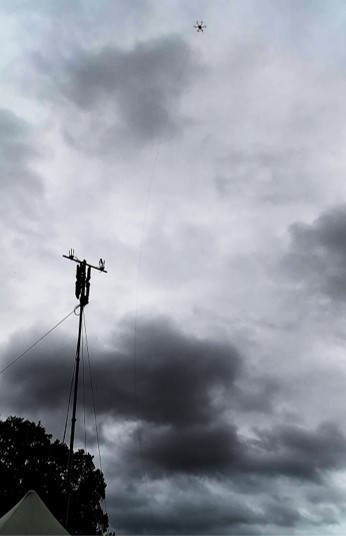 There are many benefits to using tethered drones in general, especially when compared to untethered UAVs. As we will see, these benefits are characteristics sought after by any location looking for day-night surveillance capabilities.

The first is relatively unlimited power. Tethered drone stations are typically connected to AC power, which the station coverts to DC. With power from the electric grid or a generator, the UAV has an almost limitless power source. Flight times measured in minutes for LiPo battery powered drones are measured in hours with tethered drones.

Data collected by drones conducting aerial surveillance is sensitive in nature. Untethered drones must transmit their information wirelessly to pilots and operations centers opening the information up to hackers. Tethered drones use a fiber optic cable to transfer data, making them virtually hack-proof.

Pilots maneuvering drones while following a target face the challenging task of flying stable enough to produce reliable image capture. Tethered drones significantly reduce the effects of flying maneuvers on the videos and images collected by the UAV. Additionally, this means a pilot does not need to be highly proficient in maneuvering the military drone to accomplish the mission.

Tethered drones can be safer than untethered drones. Since the tether keeps the drone in a small area, there is less risk of harm to property and people should the drone malfunction and fall due to, say, a bird strike.

Border security is a complicated problem. With many borders stretching for hundreds of miles, the task of monitoring these boundaries could require enormous human resources. Obstacles like fences or walls are only as good as the assets watching them. In short, borders are vulnerable locations.

Tethered drones are easy to employ along borders. Some of the best UAVs can detect vehicles many miles away. With an almost limitless power source, tethered drones can stay on station for many hours, providing constant day-night surveillance.

Military drones with limited flight duration require frequent off station time as they land for additional fuel or fresh batteries. As drones leave their designated area to refuel, situational awareness is decreased. Adversaries can exploit lapses in coverage. This dangerous situation is easily be avoided with tethered drone systems. It is more difficult to move undetected through borders employing tethered drones.

As a former Marine, I have spent an extensive amount of time operating from FOBs in Iraq and Afghanistan. Through my experiences, I have learned that FOBs are problematic to defend. For starters, your enemy knows exactly where you are located. They also get to choose when and how they will attack your position.

Guard towers, perimeter walls, and obstacles allow for some standoff, but for the most part, the enemy is already too close once they have reached the view of guard towers. Because of these factors, vulnerable positions like FOBs should have the ability to identify threats at a distance.

Mounted cameras provide some protection but will not be able to see as far as aerial cameras. Tethered drones can provide FOBs with constant surveillance at a considerable distance. More standoff means more time to prepare for an attack.

Borders, FOBs, critical infrastructure, and other military installations are not only vulnerable to physical attacks. Cyberwarfare is becoming a significant concern. The hacking capabilities of some countries are becoming a powerful component of their military strategy.

Military drones use wireless communication, which can be hacked. Additionally, the field of counter-UAS technology is growing. Systems are in use that can jam drones and bring them down. The equipment needed to steal data from wireless drones is cheap and reliable.

Tethered drones are free from vulnerability to these types of cyberattacks and counter-UAS systems. The tether cable provides a tactical communications link. Friendly forces can operate the drone and transfer the data the UAV collects without fear of being compromised.

When planning for the protection of important static positions, consider tethered drone systems as a force multiplier.