What Are The Benefits Of Tethered Drones?

The market for tethered drones is growing exponentially as more commercial industries adopt them for their operations. Advanced technological developments in tethered UAVs have opened up new possibilities for border patrol, Live Streaming events, setting up temporary communication towers, low altitude satellite surveillance, and much more.

What Are Tethered Drones?

Adoption of the tethered drones technology in the commercial sector recently began in 2016. Today, many defense analysts consider the technology as an integral part of future bases.

Tethered drone stations can be operated from remote or rugged environment while performing numerous tasks. Their core functions are:

Drone tethers connect the drone to a power station. They can be simply used for holding the drone in place or securing it’s hovering position. Additionaly, top industry tethers comprise of conductors, fiber optic cables, and BPL dual lines suited for dual-comm links.

Tethered drones can be deployed for varied applications, though most focus on aerial observation and telecommunications.

As a special form of professional unmanned drones, tethered UAVs are perfect for data capture, live video feed transmission, and telemetry due to the reliability of the cable links to the ground station. Besides, tethered drones can hover high enough to resemble a regular drone.

To understand the uses of tethered drones we must comprehend the limitations of their untethered counterparts.

1- First limitation is flight time. Indeed, the flight ceiling can be averaged at 30 minutes, limiting continuous applications of drone technology over extended periods. In some professions temporarily halting your mission to land the drone, swap its batteries, then send it out again is not feasible.

2- Second limitation is safety: A predictable aerial presence is beneficial in unfolding situations such as festivals, natural emergencies, crowd monitoring, etc. However, despite their amazing technology, accidents do happen with drones. In comparison, tethered drones prevent a situation where the drone flies away and leads to injury.

3- Third one is the ease of use: Tethered drones are static, offering users some situational awareness at the click of a button. In other words, you do not need advanced drone flying skills to operate one.

With these advantages in mind, we can see how tethered drones are suitable for the following industries.

Tethered drones in the defense industry

Drones have played a role in military defense maneuvers as early as 1916 in the form of radio-controlled monoplanes. Today’s advancements in military UAV technology culminate in the introduction of tethered drones or tethered drone systems. In particular, this technology is ideally suited for border security and Forward Operating Base (FOB) protection. Indeed, tethered drones can operate in most climates, monitoring the camp’s perimeter and tracking enemy movements.

As a consequence, as more military leaders find out more about this new technology and the strategic advantageous position it offers their warfighters, its use in situational awareness and force protection has become a must.

Microdrones have recon capabilities but are constrained by optical power and flight duration.

Mid-range recon drones are larger and carry more advanced payloads. They are known for their improved range and flight duration. Drones in this category are known for border security and FOB protection. Most Elistair tethered drones fall under this category. Elistair’s Orion 2 has a 24-hour  flight time while detecting vehicles as far as 10 km away. Its systems are secured and hack-proof. Advanced reconnaissance systems like Global Hawk fall into this category too. They can reach ceilings of over 60,000 feet and 32 hours.

Small military drones run on LiPo batteries while the larger ones use aircraft fuel. The limitations posed by batteries and fuel are a limiting factor.

Border security is complicated given the geographical expanse, natural terrain demarcations, the conflict-averse nature of disputed territory, and much more. When referring to border security, we are looking at all aspects of general security, surveillance at checkpoints, and monitoring of entry/exit points.

As an example, porous borders pose great natural security challenges to countries surrounded by hostile states as criminals and traffickers take advantage of the situation. In parrallel, another concern is irregular or unchecked immigration – a task that requires a lot of investment in manpower to secure it. In brief, physical barriers like walls, trenches, and fences are only as good as the assets monitoring them.

Forward operating bases are complex to defend. They require in particular a great deal of manpower and assets to maintain an edge over the enemy should there be sporadic attacks. Besides, armies are forced to adapt to budgetary adjustments, domestic political pressure in favor of military drawdowns, avoid presenting a semblance of an occupier force, and safeguarding vital strategic interests.

Also, infrastructural challenges are another factor affecting the ability of military bases to maintain communication at the FOB. Investing in watchtowers, obstacles and perimeter walls are viable options, however, in most cases, the enemy is already too close. The exposed vulnerability of a FOB forces military leaders to identify threats while off at a distance.

Mounted cameras can protect warfighters but cannot see as far as aerial cameras, whereas Tethered drones provide FOB surveillance over a wide optical range. Especially with an impressive optical 30 times zoom ability, the cameras can detect vehicles and other large objects 10 km away. Additionnally tethered drones offer BVLOS surveillance, an ability lacking in static cameras. Consequently, when danger is spotted, soldiers have more time to prepare for any attack.

Areas manned by military personnel such as borders, FOBs, installations, and other critical infrastructures are vulnerable to attack and infiltration if improperly manned. Modern technological advancements expose vulnerabilities on unmanned aircraft to hacking. The same applies to counter-UAS technologies, drone jamming technology, and infiltration equipment. Tethered drones are immune to a cyberattack or counter-UAS systems. The tether cable is a tactical communication link safeguarding the drone from infiltration

Appart from the defense sector, tethered drones are widely used for the securization of people and goods in the public and private areas. With their minor logisitcal footprint and their ability to cover wide areas at a glance they are a critical assets for security operators. In addition, a permanent eye in the sky with immediate video feedback provide them with a key situational awareness and considerably facilitates their interventions. Examples of missions can be event surveillance, permiter securization or crowd monitoring to mention just a few.

Another frontier for tether drones is newsgathering.  Elistair drones have great options for the media industry. Tethered UAVs can reach previously inaccessible areas and be maintained for hours. Tethered drones can offer 4K aerial video streaming of large outdoor events such as sporting or musical concerts. Elistair drones provide a new perspective on filming drones safely. 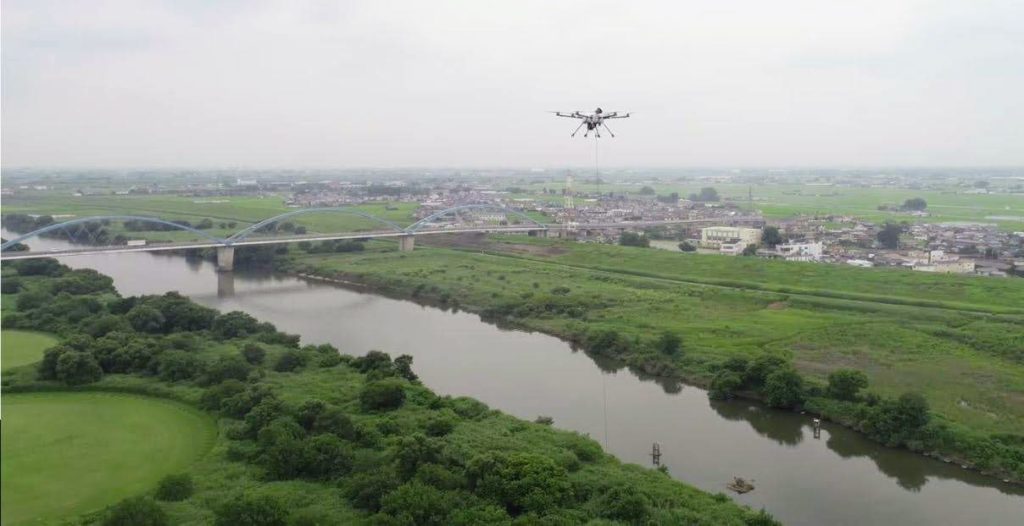 Autonomy – Tethered drones offer autonomous flight allowing the operators to focus on their observation mission more than on the piloting of the drone. Tether drones operate up to 300 feet above ground level. Tethered UAS are allowed use by the Federal Aviation Administration (FAA).

Flexible legislation – Legislation around tethered drones is flexible as several rules on commercial drones do not apply. For instance, in some countries, tethered drones are not classified as drones given their stationery positioning while connected to the ground. In other countries, users of tethered drone systems are not mandated to have them registered as their free-flying counterparts.

Limited spatial area – A tethered UAS operates within a limited spatial area restricted by the tether. It is for that reason one does not need a trained pilot to operate a tethered drone. GPS navigation is not required, reducing the incidences of crashing while covering a wide spatial area.

Safe data transfer – While free-flying drones may occasionally lose their data links to interrupted flights or lost data links, tethered drones benefit from an uninterrupted yet secure line of communication between the ground station and the aircraft. Smart options are secure and great for sensitive communications.

Deterrence –  Tethered drones are an overt deterrence mechanism.

When operating a drone in public areas, safety is paramount. Tethered drones offer greater reliability than other market alternatives.

The Regulations of Tethered drones

The Federal Aviation Administration is the organization charged with governing all drone operations within the United States. According to the new regulations, commercial drones are allowed and tethered drones are not exempt from that category. Take time to go through every country’s airspace regulations. This helps avoid unnecessary penalties that arise out of ignorance. Find more details here.

European Union Aviation Safety Agency is the body governing drone regulations in the EU. The new laws published in June 2020 took effect on the 1st of July, streamlining the classification of drones to allow for cross border use. Tethered drones fall under the class C3 for aircraft with MTOM below 25kg. Check out proposal 19.

About Elistair, The Tethered Drone Company

Elistair is a drone design and manufacturing company. The company is a leading innovator in drones technologies on continuous air broadcasting, traffic monitoring, firefighting, and aerial surveillance. The company is a leader in new generation tethered drone stations and has deployed over 600 tethered stations since it launched its first tethering system in 2015. 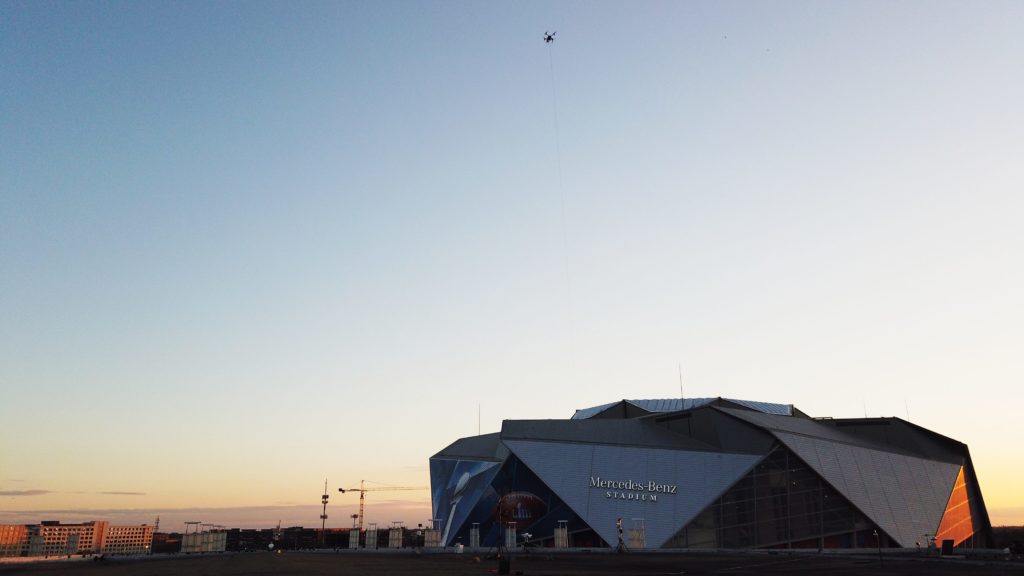 Where Have Elistair Tethered Drone Stations Been Applied Before?

During the first democratic debate, CNN covered 13 hours worth of aerial footage using the Elistair Ligh-T drone tether system. The event was at Drake University campus in Des Moines, Iowa, and supported by Vector Solutions, a tether expert.

Two Elistair tethered drones were deployed for security and news feed transmission during the 2019 Super Bowl held in Atlanta. A drone was tethered to the Elistair Ligh-T station allowing continuous aerial surveillance. Micro-tether technology enabled a seamless transmission of the Los Angeles Rams versus New England Patriots game without having to switch out the batteries.

Among Elistair’s top customers are the French Defense Procurement Agency, the US Army, the United Nations, the UK Ministry of Defense, the Paris Police Department, Thales, Vodafone, and Petronas. The company’s tethered drone systems have also contributed to the security of major events such as the 2018 Ryder Cup, the F1 Grand Prix at Le Castellet, the 2019 Superbowl, and the 2019 Ski World Cup in Sweden, among others.