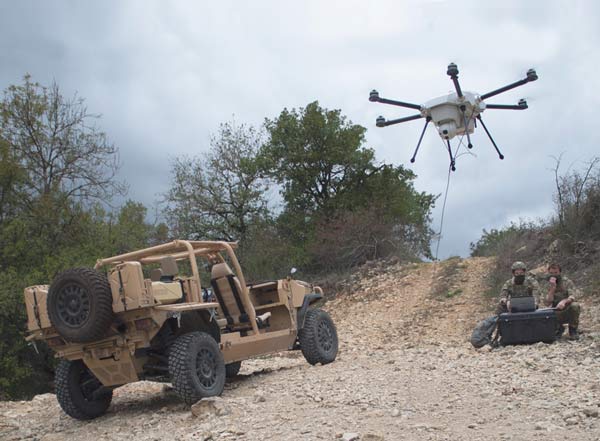 Unlike other multi-rotor drones, the Orion 2 hexacopter is a tethered drone that delivers surveillance for up to 24 hours at a time. This it a true persistent surveillance platform for defense applications.

“Small UAVs are great if you want a hover-and-stare capability. However, they are short on battery life.”  Said Timothée Penet, CTO and co-founder of Elistair.

“Solutions like our powered tethering stations, Safe-T 2 and Ligh-T 4, increase a platform’s time in the air which is great for many missions. But what if you need to fly for a whole day?”

That is where Orion 2 tethered drone comes into the picture.

A lightweight yet extremely durable tethered drone for defense

The Orion 2 tethered drone is a quick-deploy system with an automated push-button for takeoff and landing. Above all, it can stay in the air for 24 hours.

Previously, this could only be done by helium-filled aerostats, which are much larger with very complicated logistics.

Ruggedized and redundant at every level

“We developed redundancies at every level so that Orion 2 can stay up that long.” Said Pierre-Moana Levesque, R&D Director at Elistair.“For example, we made it IP54. In addition, we optimized the lifespan of the components, including the motors. And moreover, we added a safety battery that recharges in the air.”

Consequently, the Orion 2 is a clear improvement over the original version, which already proved itself internationally. Indeed, the Orion helped secure the Ryder Cup in 2018 when it flew over 300,000 attendees for 8 to 11 hours a day. Likewise, it has been employed by the French police, British military, and Singaporean government.

Additionaly, with its 330 feet (100 meters) micro-tether, the Orion 2 flies higher than its predecessor. As a consequence it surveils more ground. Besides, it can carry up to 2kg (4.5 pounds) of payload and can serve simultaneously as an ISR and telecom platform. Also, the Orion 2 can stream georeferenced electro-optical and infrared imagery at the same time. Finally, it can deploy 4G/5G communications nodes through a fiber optics cable option.

“The Orion 2 tethered drone is a clear advance over the very capable Orion, in terms of persistence, logistical footprint, and data control. We are thrilled by this product launch.” said Guilhem de Marliave, CEO and co-founder of Elistair.

About Elistair, the tethered drone company

For more information about Elistair and its products, please visit https://elistair.com and get the latest developments on Linkedin @elistair.